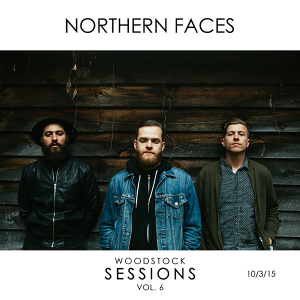 Northern Faces are an alternative rock band signed to Equal Vision Records with roots in New York’s Capital District. 2015 has already been very much a breakthrough year for the band as they’ve not only released their debut record, but also spent time on the road supporting The Dear Hunter and on their own headlining summer tour. In addition to those runs the band has also shared the stage with the likes of Royal Blood, The 1975, Cage The Elephant, Kongos, Say Anything, RX Bandits, Electric Guest, Civil Twilight, Heartless Bastards and made waves at both SXSW and CMJ. Needless to say, their brand of guitar-heavy, anthemic rock and dynamic live show has captured the audience at every step along the way.

Fresh upon returning from their headline run on the Back And At It 2015 tour, Albany-based alternative rock trio Northern Faces will head downstate to Woodstock, NY in order to participate in one of the revered Woodstock Sessions at Applehead Studios On October 3rd. The session, which will also feature Stellar Young, will come just a few weeks after wrapping their late summer tour which will include dates at Riot Fest (Chicago and Denver), Music Meets Fashion Festival and a handful of other prominent performances.