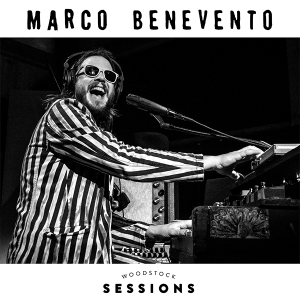 PART OF ONGOING SERIES RECORDED IN FRONT OF A STUDIO AUDIENCE AT APPLEHEAD RECORDING IN WOODSTOCK, NY

Marco Benevento has announced the release of a new live album, The Woodstock Sessions, due out on February 17. Recorded at Applehead Recording in Woodstock, NY in front of a sold out studio audience last summer in one single take, the collection marks Benevento’s inauguration into the acclaimed series, which already includes Bad Brains, Medeski Martin & Wood + Nels Cline and Joseph Arthur among others. A highlight of the evening was a version of “Coyote Hearing” from Benevento’s 2014 release, Swift. The track is available now to stream and feature, while the entire record can be pre-ordered via PledgeMusic.

The track-listing of The Woodstock Sessions spans Benevento’s entire catalog. He and his band—Karina Rykman on bass and Andy Borger on drums—perform the entire 22-minute “The Story of Fred Short” suite from last year’s studio album of the same name. “Greenpoint” from 2010’s Betweeen Needles & Nightfall, as well as “At The Show” from Swift are also featured.

For more than a decade, Benevento has been amassing an extensive body of work with studio albums and live performances that connect the vast space between LCD Soundsystem and Leon Russell—a union of pulsating dance rock energy with quirky, earthy songwriting to match. Benevento’s studio LP, The Story of Fred Short,and this companion live release, The Woodstock Sessions, mark some of his finest and most adventurous work to date—a maestro making “bold indie rock” wrote Brooklyn Vegan, while AllMusic called it “music that disregards genres and carries an omnivorous approach.”